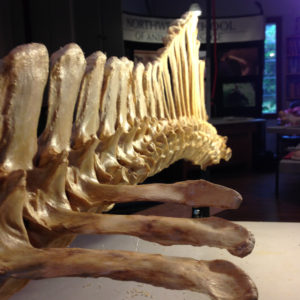 Why do horses let us ride them?

The question has more than one answer, and some say that we shouldn’t ever. From my experience, I think that horses are willing to be ridden if they are not in pain and have not been abused around it.

Horses are highly social beings. They live in herds, sometimes multi-species herds if an equine companion isn’t available. Horses (and dogs) evolved along with humankind. There is some interesting speculation about whether it was the originally the horses’ idea to get closer to people, or vice versa. Due to their natures and our shared evolution, both equines and canines generally like having a job, a partnership, with a person. Whether it’s carrying us or hauling our stuff, or one of the many other roles horses play in our world past and present, they are amazingly willing.

But horses bodies did not evolve to be ridden. They have tiny feet relative to the mass of their bodies.

Let’s look at their spines. The cervical (neck) vertebrae make up the most mobile part of the spine. Horses can graze from the ground or reach high above their backs; they can bite their hips and flanks. Many horses’ necks help them keep their balance, especially if their rider struggles to.

The relative immobility of a horse’s barrel is why we can sit on them. The thoracic (chest) vertebrae attach to the ribs and make up the place where we sit.

The lumbar vertebrae are similar to our lower backs, and as the transition between the chest cavity and the pelvis, can be a trouble spot in both species. Besides the neck and tail, the lumbar spine has the most ability to move.

The sacral vertebrae are fused to the sacrum which receives the energy produced in the hind legs and transfers it through the rest of the spine and back muscles.

Between the shoulder and the pelvis along either side of the spine, lie the back muscles. The photo looks towards the head from the hind end, and shows the lumbar vertebrae in the foreground, followed by the thoracic. The vertical parts of each vertebrae are the spinous processes, and the horizontal are the transverse processes. In the thoracic region, the ribs attach and form a similar shelf as the transverse processes in the lumbar spine. That shelf is where the long back muscles lie.

I’d like to introduce you to two important back muscles. First, the Longissimus dorsi (aka longest dorsal muscle), lies next to the spine and attaches from the sacrum and pelvis to each of the lumbar and thoracic vertebrae to the last cervical vertebra just in front of the shoulder. Second, is the Iliocostalis dorsi (aka iliocostal muscle) which lies on the other side of the Longissimus from the spine. It also attaches to the pelvis and each thoracic vertebrae and the last three cervical vertebrae.

These two muscules do several important things: stablize the spine, extend the spine (hollowing the back), and supporting inhalation. By virtue of connecting the pelvis with the neck of the horse, these muscles play a significant role in carrying the energy generated in the hind quarters through the rest of the body. And this is also where we sit.

So while horses are mostly willing to be ridden, they are also challenged by it. Their anatomy allows it, but didn’t evolve to bear more weight than the barrel itself. Rider balance and poor saddle fit add complexity to the situation.

Sitting on their backs compresses the long back muscles, and the impact of a saddle and rider can contribute to developing tightness or restrictions in a horse’s back muscles. The same ones that carry the energy from back to front. Like a garden hose with a kink in it, a compromised muscle isn’t working at its optimal capacity.

With my clients and in bodywork clinics, I teach a few simple ways to support the health of their horse’s back every time we groom or work with them. The strokes help the muscles to decompress, and bring circulation back into the blood, lymph and nerves all along the spine. A few minutes each time you are with your horse will make a big difference over time. Plus your horse will thank you, too!