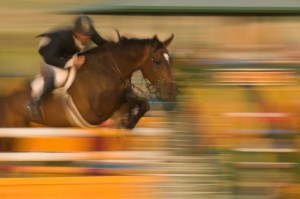 Have you been inspired to set performance goals for yourself and your horse after watching the Olympics, or other equestrian events?

Lots of us have, with varying degrees of success. Having the right support team is essential as you increase the demands you place on your horse’s and your own body: a trusted, experienced trainer can help you and your horse with the physical and mental progress you seek. Your veterinarian, farrier, and saddle fitter have important roles as well.

Bodywork also makes a difference. We often stress our muscles (or our horse’s muscles) as we workout to increase strength. But when our muscles feel sore a day or two later, it can be hard to workout. Here are six of the physiological ways that massage and bodywork can support your athletic goals. (Read the whole list and where it came from here.)

Considering these specific benefits, training combined with bodywork can be an incredibly powerful combination, especially when training horses who don’t have the long term goals that we do. They just feel tired or sore. Keeping them physically comfortable during training and competition can be a significant component of a successful season. Being mentally, emotionally, and physically healthy enables our horses to partner with us to perform better (jump higher and cleaner, run faster, do cleaner lead changes, go greater distances), and do so more easily and with fewer injuries.

You don’t have to take my word for it. An article in the May/June 2016 issue of Massage & Bodywork magazine, “Achieving Peak Performance Through Sports Massage” described the results of bodywork given to top college football players during the highly competitive NFL Scouting Combine. Small things can make a difference in an athlete’s success—such as their position in the NFL draft—a 1/2 inch increase in stride length, a fraction of a second faster in the 40-yard dash, an uptick in confidence all translate into improved performance. All participants in the Combine received daily sessions of modified structural integration* (bodywork) during the event. The results were notable—a decrease in injury rates and more players recovering from injuries sooner. Here are a few key points from the article:

In Jack Meagher’s** 1980 book Sportsmassage, he wrote, “Whatever sport you play, Sportsmassage will give you 20% extra – extra performance, extra protection, extra time, per game, per season, per career.” 36 years later, that is still the conversation being held today: massage is most sought after health service during Olympic Games by Olympic athletes. ***

We’ve all heard the phrase, “use it or lose it.” That is very true, and I’d like to add that taking care of your body with good nutrition, stretching, relaxation, AND bodywork/massage is essential to sustaining favorite activities. My favorite example is my dad, who skied and hiked all through his 70s, and played tennis twice a week until he was 91 and had a stroke. He took his health seriously, ate healthy food in moderation, and stayed active doing things he loved. Regular bodywork makes a difference to your strength and flexibility in all parts of your life, and it makes a difference to your horse if you are able to move more fluidly together.

As you map out your plan to reach your equestrian goals, make regular bodywork—for you and your horse—part of your strategy to get there with enhanced performance and minimal injury. You’ll have a lot more fun along the way!

**Who was Jack Meagher? As a sports massage therapist, Jack Meagher joined the 1976 US Equestrian Team at the Montreal Olympics and other international competitions. He contributed much of the logic and techniques used in sports massage today for horses and humans. His pioneering work in the 1950s onward paved the way for acceptance of massage therapy throughout the world.

*** This paragraph was paraphrased from “The Evolution of U.S. Sports Massage” by Karrie Osborn and published in the May/June 2016 issue of Massage & Bodywork magazine.