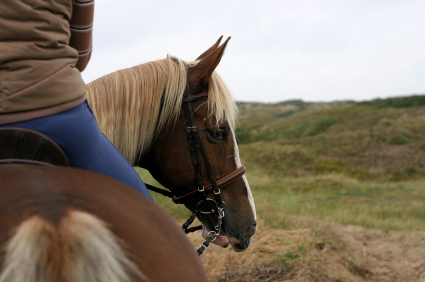 No matter that it has been there

six years—one-fourth of his life—

passing the new fence, he shies.

Or soft clouds of thistle-stands gone

anything white will do. The grey fox,

all summer collapsing into sharp teeth

and the curved light of bones, is more than enough

to tighten my knees five strides before,

for he is always surprised.

He believes that we cannot know

where it will come from, the lion that hides

its fierce claws within Things, but he knows it is white.

And he may be right: sprayed salt flecks the muzzle

deep in the oats of his green plastic pail,

more stars open each year into his neck’s early dusk.

I, too, now wear that warning. And so pray

to the four-legged gods as we trot briskly on,

“Oh, for him, in this temperate climate

so near the sea, again this year let it not snow.”

For surely the sight would kill him, everything Lion.

But even home-turned in yellow September,

the warmest month here, it could be waiting—

a styrofoam cup, a dropped visor.

He is prepared, will save both of our lives.

Later, he takes his apple and turns

towards the hill where the others drift slowly higher,

to follow the currents of forage. The one he loved—

Candy, half-white and half-red—has gone on ahead.