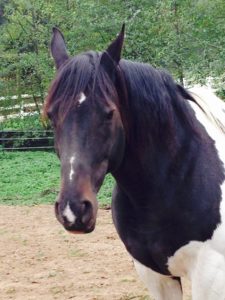 Horses’ utter honesty fascinates me. They do not fake it, and it may be even more true about mares. There are horses who are more stoic, and horses who are more expressive and more sensitive (not necessarily at the same time), but as we get to know an individual, they are still completely honest.

I know there are many shut down horses, who appear calm, bombproof, maybe easy going. That results from being dominated by humans, but not listened to well enough to offer their voice. With time and the right care, these horses come back into their own and share their most honest selves, too.

On the final day of a dressage competition, I was asked to do an hour of bodywork with a half-Arab mare named Piñataa before she rode home in the trailer. For me, her name evokes childhood birthday parties and blindfolded bashing at tissue decorated paper maché shapes suspended in the air. When the piñata is finally broken open, candy and little toys scatter everywhere while all the kids gather up what they can.

But besides birthday parties, the name, for me, evokes hidden treasure.

I found my client and her horse midway down the barn aisle. The show was over, and it was deliciously dark and quiet inside the old barn.

Standing in her stall, Piñataa was resting after three days of competition: ears back, worried eye, vigilant. “She’s an opinionated mare,” said her rider/trainer/co-owner. Indeed she was, but not unreachable, it turned out.

I stepped into her stall, approaching to an arm’s length away from her shoulder. I exhaled, and stepped back, leaning against the wall of the stall.

R.E.S.P.E.C.T. is what I was offering—and what she wanted. I was hired to help her relax. I had 60 minutes. No pressure.

Introducing myself to a new horse, reading her mood and body language, and approaching her in a way that helps her relax—these are a big part of my skill set as an equine bodyworker. It’s not enough to know which muscle does what, or a particular stroke. Horses don’t care what training or license I have. They care about how it feels when I stand next to them.

There wasn’t any place she could go, but I went ever so slowly in standing closer to her, showing her that I was listening, trying to speak her language. After a few minutes of standing closer (inside her personal space) and breathing quietly, I put my hands on her with a firm, flowing stroke that I often use to say hello to a horse’s tissues. Going slowly, pausing often with a big exhale, we became acquainted.

Piñataa snorted when I showed her my magic grooming tool (looks like a child’s plastic rake) even though it smells like many horses. I tried 3 or 4 times as the session progressed, but it was a definite no go!

As I quietly worked, the mare relaxed into vibrations and stretches to her front legs and shoulders. She leaned into deep fascial release strokes over her hindquarters and hamstrings. As I worked between her scapula and withers and across her neck, she stretched it out in pleasure. She almost blissed out with the craniosacral diaphragm release.

I got to notice what her ears did when her person walked by (loading the trailer). First, her ears pricked forward with interest, “Oh, someone is coming!” Then, as the person passed by, ears pinned back, “I am a grumpy mare, I might bite or kick.” And as the person goes away, ears forward again tracking them, “Oh look, someone is going away!”

It didn’t matter who walked by, she did the same thing each time. Meanwhile, her eye had softened, her neck was lower, and she and I had spent a delightful hour together.

I shared my observation with her owner who laughed and agreed. The mare’s other co-owner had said  one day, “Piñataa doesn’t like me.” In truth, it wasn’t personal.

Do I love the puzzle of finding a connection with a new horse and discovering what secrets their bodies hold? I really do. I also love the challenge in horses’ honesty in each moment. Horses have taught me to be more present and more honest, too.

What hidden—or not so hidden—treasures have you received from spending time with horses? Please comment!

Photo taken by me of Eve, another lovely mare who wants respect