How healing happens during bodywork

How healing happens during bodywork 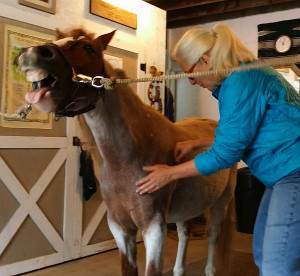 Ever wondered why bodywork and massage help healing?

Healing releases and responses in horses take many forms. I see horses heave deep sighs, blow, shudder, shake nose to tail like a wet dog, stretch (some even do a ‘down dog’ yoga stretch, yawn, lick and chew, and go deep inside for internal processing that looks as if they’re watching a private movie. I perceive that these big releases happen on a systemic level from the combined effects of several factors, including the cellular/tissue level resulting from direct touch.

An article about the science behind licking and chewing, explains what is happening. The author, Sue McConnell, PhD, founded the equine behavior program at the University of Pennsylvania School of Veterinary Medicine, and is a well respected animal behaviorist. In the article, she describes how licking and chewing signals the shift from the horse being in the state of fight or flight (Sympathetic Nervous System) to the state of rest and digest (Parasympathetic Nervous System.) For a comparison of the functions of Parasympathetic and Sympathetic nervous systems, check out this link.

I have talked with several other bodywork professionals, and believe that the Sympathetic-Parasympathetic shift identified as the source of licking and chewing can be generalized to include the other forms of release mentioned in the first paragraph.

In a Sympathetic response (fight or flight), the body releases adrenaline which causes constriction of the blood vessels to all the organs, decreasing their function. It’s kind of an ‘all hands on deck’ mode where everything in the body is poised to do whatever it takes to survive. When in Parasympathetic mode (rest, digest, relax), blood vessels dilate which increases heat, circulation, and expansion of the energy field. Increased blood flow causes gut sounds often associated with the shift back to Parasympathetic mode. Considering these physical responses, you can see why the Parasympathetic response plays a major role in how the body recuperates and recovers from stress. That is the big picture. Next we consider what happens where hand meets tissue.

These photos show the wave of tissue preceding the compression caused by my hand during a stroke. I am pushing the tissue ahead of my hand which is creating compression of the cells. Think of a squeezing the water out of sponge. Compression pushes toxins out of the cell carried in fluid. After the compression, the cells rehydrate, reabsorbing fluid like a dry sponge. This process is a cellular release and can produce a detox effect in the body afterwards. This release allows the fascia to lengthen, and stuck places to regain flexibility. 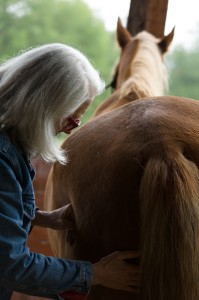 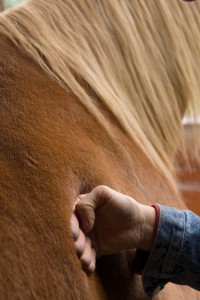 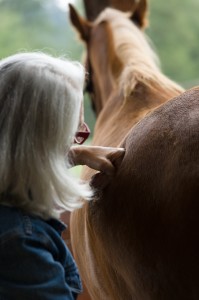 Sometimes horses begin to yawn or lick and chew before I’ve touched them. I’ve wondered what physically causes that response. I think we can also understand this response in terms of shifting from fight or flight to rest and digest.

Knowing how exquisitely sensitive horses are to subtle shifts in their surroundings, when I approach a horse and stand next to them, I am aware of being inside their energy bubble, and of impacting their immediate environment. However small and benign I may appear, my presence is stimulus or input, and as such could create a small ripple of stress that shifts them into fight or flight. As I stand with them and give them time to adjust to my being there, they shift back to their place of rest/digest/relaxation, and there is a release: a sigh, lick and chew, etc. I believe these releases happen on a systemic level and result from combinations of the specific tissue releases and the input of my presence.

This dance between relaxation and stress within our bodies is normal. Life is a combination of input and output, of stress and relaxation. We shift back and forth between Sympathetic and Parasympathetic while we process the input and stimulation that makes up life. I use ‘we’ because it’s true for people and horses (and other animals with nervous systems like ours.)

If you are interested in the shift between Sympathetic and Parasympathetic nervous systems, you might enjoy this post about a horse who got scared (went into fight or flight) and how he returned to rest and digest in time for the trailer ride to the show.

What have you observed while spending time with horses, animals, and humans?