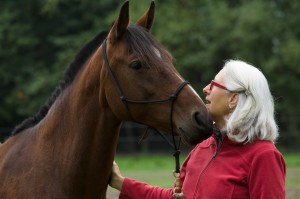 Of the two spoiled, barn-sour geldings

we owned that year, it was Red —

skittish and prone to explode

even at fourteen years — who’d let me

hold to my face his own: the massive labyrinthine

caverns of the nostrils, the broad plain

up the head to the eyes. He’d let me stroke

his coarse chin whiskers and take

into my hands, press my man’s carnivorous

kiss to his grass-nipping upper half of one, just

so that I could smell

the long way his breath had come from the rain

and the sun, the lungs and the heart,

from a world that meant no harm.

poem by Robert Wrigley from Lives of the Animals ©2003