The necessity of horses

The necessity of horses 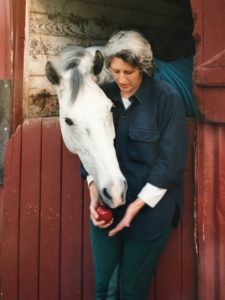 I am not in that group. I tried, but our family moved every few years, and it was difficult to sustain the same activities from one state to the next. We moved when I was 11, and my mother tried to find me a place to ride, but it never clicked the same way as Mr. Davies’ barn had done when I was 9. And so many years passed. Nearly 30, in fact. The summer before my 40th birthday I started taking riding lessons on a whim. I was unprepared for what was about to happen to me. Six months later I was a brand new horse owner of a gorgeous dapple gray gelding who had the fine idea that he and I should spend the rest of his life together. So of course, we did. I have no regrets besides wishing I knew then what I know now. You can read the story of Blue Horse here.

He cracked my newly divorced heart wide open in the best way, and kept doing so over and over again until he left his physical existence. After he died I thought, “Oh that was wonderful, and now I’m done with horses.” I did have some other things I wanted to spend time doing. My friend said to me, “I don’t think we are ever really done with horses.”

She was right, of course.

A couple of years later I was enjoying a beginning zen meditation practice, and to express gratitude to my teacher, I went up to his farm outside Bellingham for a work day. Their farm had a big vegetable garden, and I enjoy gardening. When his wife apologetically asked if I would mind picking the manure out of the horse’s paddock, I said I didn’t mind and proceeded to spend a hot August afternoon discovering just how “not done” with horses I truly was.

Can you guess what it was? Yep. The smell of dry horse poop. Sounds of horses chewing hay, breathing and blowing, stomping flies—they were the supporting cast.

By then I was a home owner, self-employed, and not really sure what I wanted to do with horses besides be with them (and smell them.) I volunteered at the therapeutic riding center. I was introduced to Linda Kohanov’s books and recognized the healing power in the deep connections she and her clients had with their horses. This (equine facilitated learning) was what I wanted to do with horses! I went to Tucson and studied with Linda, having some important and validating experiences with the horses there.

I left Tucson having promised The Sisterhood of Black Mares that I would help bring this work into the world. It made so much sense—horses embody the feminine principle in very deep ways, and humans are often more open to insights received via horse than from another person. But I was still conceptualizing it in a linear way, and could not imagine how I was going to pull this off. I needed a farm, horses, and some form of activity that would draw people out of the city to me and the horses. I had none of those things, and unfortunately, it was also 2008, and the big recession that soon followed absorbed my time and attention to keep my mortgage current.

My friend Peggy had horses, and invited me to come and spend time with them. I did as often as I could drive 50 miles to the other side of Seattle. She was generous with her time and her herd. I was so grateful. Still yearning, still not knowing how I would make this work, and feeling pretty stuck around it. As the recession wore on, it settled onto the back burner of my attention.

A few more years went by, the recession began to recede and my 60th birthday loomed. I was clear that I did not want to be doing what I had been doing into my 60s and 70s. As I searched for answers about what to do—real answers, not mental gymnastics answers—I had some interesting and enlightening conversations.

There was one where I was talking about various things I might do, and my companion would look at me and say, “It doesn’t light up in your field.”

We did that for a while. Then I said, “Well, after sitting in class with so many people who are healers, I know I’m not a healer.”

Quiet pause. “It really lights up in your field.”

Companion gestures from inside of elbows to finger tips on both arms.

Me, “Oh that. I’ve known I have healing energy in my hands for ten years. I thought everybody did.”

That led to several more conversations with friends about what kind of healing I might do. Then one day as I lay in my underwear on Dan’s table receiving bodywork, he suggested I take the bodywork for horses program run by a couple he knew. “Oh, I couldn’t possibly do that! I can’t afford it,” says I. But I already knew about this program, having discovered it several years before.

photo of Barbara & Blue Horse circa 1994