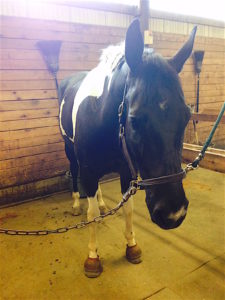 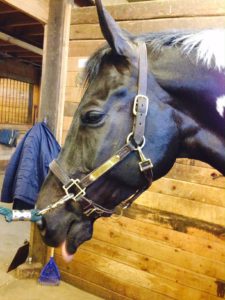 I’ve been lucky enough to work with hundreds of horses in bodywork sessions, but usually when they begin yawning my phone is in my pocket, and I’m standing next to their hind end. In other words, my timing and vista aren’t usually ideal to photograph horses during their sessions, plus, I’m there for the horse’s benefit. Even so, I have a few, and since I love seeing other people’s horse snapshots, I thought to share. These were mostly taken at the end of a session or while the horses were doing deep processing. During their processing, I give them space without more input from my hands, often stepping away.

First we have Darwin, a 17hh paint Dutch warmblood/Thoroughbred cross with EPPSM. A sweet gelding with a sense of humor, he works as a hunter/jumper. I was called because he was grumpy and sore, doing many sessions with him over a year’s time to help keep him sound and comfortable in his work. The bodywork seems to have helped a lot, along with other good training and care that he received. These were photos taken while he processed.

Next is lovely Violet, a very sensitive Appaloosa mare who works in a horse therapy program. I took the photos because this was the first time a horse has laid down during a session with me. After beginning very slowly, and not much direct touch from me, Vi went into quite deep processing with many yawns. After making a deep guttural sound, she lay down and rolled. An hour had passed, and we agreed that Violet had had her fill of bodywork for the day. We were surprised, and also very touched that she felt safe enough process so deeply and to lie down. 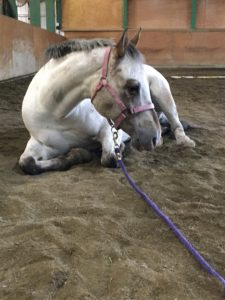 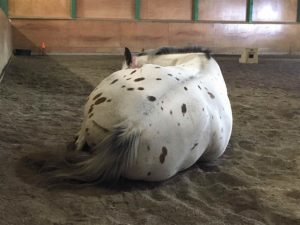 Danny is a 17 year old Paint Quarter Horse gelding intended to be a school horse. First photo shows him standing square at the end of his first session. He began camped out behind for comfort. Danny began his life as a halter horse, followed by many other competitive disciplines. The phrase ‘peeling layers of the onion’ was coined for horses like him. Sweet as the day is long, but carrying a lifetime of compensations in his body. Less than he had, though. 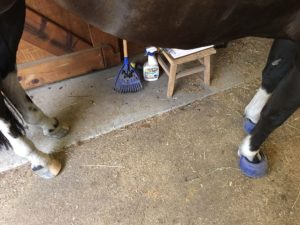 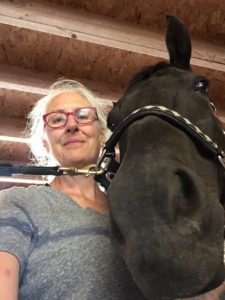 Last, but certainly not least, is Beyoncé, a regal Dutch Warmblood mare competing in FEI dressage. I almost feel badly showing her looking so relaxed, but relaxation is essential to health, and growing and training as an athlete, not to mention beauty rest. I love this mare, perhaps because she doesn’t give it away to everybody. We have a sweet connection through which I help her relax and unwind her considerable muscles. 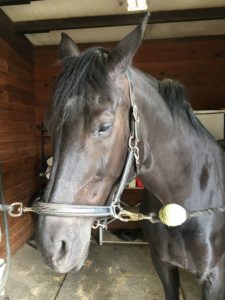