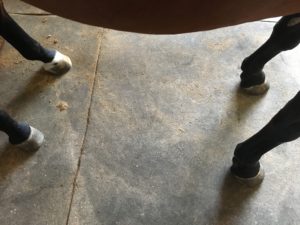 What’s so important about a horse standing square?

It isn’t just what horses and riders do at the beginning and ending of dressage tests.

When horses habitually stand with one foot forward, or their feet camped out in front or behind, or when they stand with feet closer together than their shoulder or hip joints (base narrow), they are out of balance. But if they prefer standing that way, it is because they feel more comfortable, or at one time it was a way to feel more comfortable, and a compensation became a habit that never went away.

I have been taught that it is healthier for the horse to stand square with equal weight on all four feet. Bodies want to be in balance, so it makes sense to me.

How we stand is our foundation. A body in balance and alignment is able to self-correct. The ability to return to balance is one definition of health. Because life happens, stress happens, and sometimes really big traumatic things happen.

I think of health, like balance, as an ebb and flow. I have received enough bodywork that when my body goes into a compensation pattern, by taking gentle measures, it will usually return to comfort from discomfort within 12 to 24 hours. When my house was broken into a few years ago, thankfully with minimal physical loss, I had shock and trauma in my body. I felt as if I had PTSD because every time I’d come home, I’d check everything to make sure everything was safe. Four bodywork sessions later, the shock was released from my body. Gone.

Bigger impacts often require outside intervention to support the body’s return to balance. And there you have the reason I believe that bodywork is part of a healthy life for me and my horse, for you and your horse.

The other thing to mention is mental and emotional stress and trauma. We mammals store mental and emotional stuff in our tissues right along with the physical stuff. “Stuff” refers to the stress/fatigue/trauma that is part of life. Obviously, smaller stress has less “stuff” associated with it, and bigger stress and trauma has lots more. We’re talking about the difference between hitting your thumb with a hammer, and being in a major car accident or riding accident. Or being in ongoing traumatic environments that involve abuse, or military combat.

If we translate that to being a horse—who is more concerned by fear than pain, the reverse of humans—we could compare having a hoof abscess to a significant lameness to being abandoned at the kill pen. Individual differences determine who suffers the most from a given event, but the horses I’ve encountered who had been sent to auction definitely knew it was not a safe or happy place to be, and their bodies reflected that, often by not wanting any touch at all.

So it’s a spectrum, and our tissue memory of our experiences is real. Bodywork and healing with knowledgeable, compassionate therapists can make all the difference. If the emotional/mental “stuff” isn’t released, the tissue still holds it and it continues to limit health, balance, and movement. And, it truly can be released. It is not a life sentence. 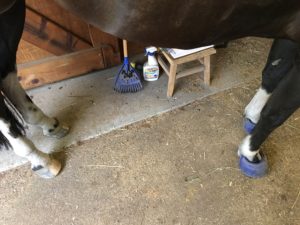 Manny went from camping out behind to standing square during his session. He still has other ways he compensates for discomfort, but this was a nice shift to witness him make on his own.

The lead photo in this post is of Gia, a Swedish mare I’ve worked with for about a year. In every session I include techniques that support her standing square, including picking up and placing her foot into a more square place, and standing quietly with her until she moves it. During this quiet standing, her brain is creating new neurons that recognize this way of standing as normal and comfortable. By standing with her, I am supporting her body to make this shift, to form a new habit. This has not been a focus of the bodywork sessions, but during a recent session, I looked down and realized that with no prompting from me, she was standing beautifully square, thus the photo.

Horses’ body language is full of clues about how they feel physically, mentally, and emotionally. Taking the time to learn it, and to respond with bodywork in small quiet ways to support their bodies to self-correct, can both support greater health and balance in your horse, and also deepen the connection between you. Happy exploring!