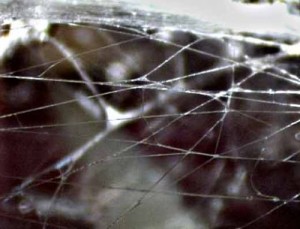 How to enhance performance & longevity in yourself & your horse

Fascia has been showing up a lot in the health media recently. This is exciting because fascia is one of the least understood systems in the body—human and equine. I’ve seen profound results in my equine bodywork practice through releasing fascia. It has fueled my passion to share this information so that riders and horses alike can benefit from greater freedom of movement and balance.

What exactly is fascia?

Fascia is the body’s network of fibrous connective tissue. You’ve seen it when you skin a chicken breast—the filmy layer between the skin and meat. Fascia used to be removed during dissection to see the “important” stuff: muscles, organs, bones, nerves, arteries, etc. We now know that fascia is the important stuff because it forms a complex network that reaches everywhere in the body. Fascia is all the soft connective tissue including fascial sheets such as the plantar fascia, the tendons, ligaments, bursae, the fascia in and around muscles, and the membranes around the brain, spinal cord and nerves.

What does fascia do?

If everything was removed from your body except fascia, the shape would still be recognizable as you. Fascia is what actually holds us up and together (not muscles and bones), so understanding fascia is essential to understanding movement—our horses and our own. Fascia’s most obvious job is to help body parts move together—wrapping around layers of muscle to slide easily as they contract and release (flex and extend). Besides movement and flexibility, fascia maintains equilibrium (balance and functionality). Fascia’s other job is to guard injured tissue. When trauma or stress occurs, the web of connective tissue changes to protect the injured area; it also holds emotions from trauma and shock. Healthy fascia enhances proprioception (knowing where your body is in space.) As one of the largest sensory organs in the body, it is a major communication network within the body. 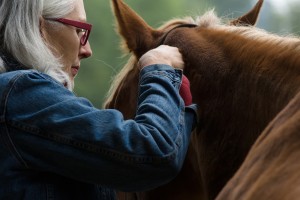 What happens to fascia?

Life happens: trauma, repetitive stress, surgery, and gravity all play a part in limiting flexibility. These stressors compress the connective tissue to form adhesions, and flexibility is reduced. Fascia will hold that compression and restrict mobility as it protects the body by limiting movement. Over time, the restriction grows or small injuries combine, and often persist after the original cause has gone.

How does aging affect fascia?

You’ve noticed one side of your body is stronger or more flexible than the other. That’s an example of compensations that horses and people develop. These patterns are the body’s ingenious way of continuing to manage around pain or limited flexibility. Bodies want to maintain equilibrium, so they compensate in order to keep going. Small injuries to the fascia can become bigger limitations as they accumulate. Most people believe that physical degeneration is part of aging, and tend to accept their growing limitations. Horses tend to hide their pain as a survival mechanism, and so we often discover their limitations when they influence performance. But the limitations started earlier, before movement was affected.

Why does bodywork make a difference?

Think of the fascial network as a sweater that’s stretchy, and where you have a snag, the neighboring stitches are bunched together around a big loop, stuck in a clump, and not as stretchy as before. Being stuck is what fascia does when injured. If not released, it thickens over time. The good news is that fascia is living tissue, and it can heal. There are many excellent bodywork modalities focused on releasing and lengthening connective tissue. The work is a lot like teasing the snag back into your sweater until you’ve restored flexibility. The process of release supports the living tissue to dump stored toxins and plump up as it rehydrates and begins moving fluidly again.

The power of touch

“The lowest (and the highest) tech therapy of all is the human hand,” says Sara Wyche in Practical Steps in Rehabilitating Your Horse. With awareness and intelligence, our hands communicate with our horses’ tissue, offering warmth, care, positive energy, and often noticing changes in the tissue before they cause any difficulties. Discomfort and pain makes humans and horses grumpy. It creates stress. The regular, ongoing care of fascia can release adhesions before they become bigger compensations. By caring for fascia, we help maintain and restore flexibility and prolong our ability or our horse’s ability to perform. Structural integration or myofascial release bodywork has been shown to increase range of motion, improve proprioception and prevent injuries, increase athletic performance, increase endurance, and improve an animal’s disposition. My bodywork sessions begin with seeking a connection for working together, then holding space for the horse to release and change through the bodywork while maintaining relaxation. I’ve learned to trust the innate wisdom of each body, and to listen to what the horse is telling me with its behavior. 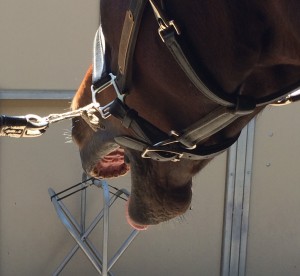 How do we recognize the releases? External signs are yawning, sighing, licking and chewing, shudders and shakes, stretches, and a very deep internal processing if the horse feels safe enough. Besides the outward signs, I recognize the changes in the tissue under my hands. It becomes more open and fluid. People have many of the same responses.

Here are a few stories to illustrate improvements in horses’ demeanor and physical performance after receiving bodywork:

Rusty, a 13 year old Quarter Horse gelding, was crabby about being cinched and did not enjoy the acupuncture he’d been offered. Starting slowly and respectfully, I offered him time and space to get used to me, followed by a gentle touch, going deeper as he showed that he enjoyed it. His person was delighted after his first session, saying, “I rode him yesterday and today and I have never had such great rides on him. Not cinchy, happy face and ears the whole time, he’s like a new horse!” Rusty stays comfortable with his regular bodywork sessions.

DonnerLily, a six year old Oldenburg mare, arrived from another state on trial and received a series of six structural integration sessions to help her to settle into her new life. As the work progressed, she relaxed enough to express herself and also to release. Her person reported that her tendency to toss her head during transitions improved after every bodywork session, and was now a minimal issue.

Dude, a beloved 24 year old school pony, was stiff, and grumpy about being touched. Dude was very protective of the front of his chest and base of his neck. After three sessions his people said he moved more evenly and freely, was less grumpy about being patted, and looked years younger.

Zeke, an eight year old OTTB was beginning to event with his young rider. He was described as being “sensitive, tense when worried, and holds tension in his barrel and chest.” He started off the bodywork session defensive of his neck and chest. By proceeding slowly, showing him I was listening, and encouraging him to let go, Zeke went into a very deep place of release and integration. The rest of the session was about maintaining his relaxation while he allowed deep work all around his body. He stayed relaxed throughout his rides at the horse trial.

Whoopi, a 10 year old Tennessee Walker mare, had her back leg broken at birth when her dam stepped on it, followed by years of compensating for the injury. She bucked riders off, and when she walked, her back feet didn’t look connected to the rest of her body. Whoopi received seven sessions over a seven month period with beautiful results: her status in the herd went up, she became less grumpy around people, she held her chiropractic adjustments as her hindquarters became more comfortable, and finally, she picked her own special person.

Because fascia is living tissue, it can heal. All athletes benefit from bodywork to keep the fascia flexible. Fascia release work, a form of bodywork or massage, specifically addresses the health and well being of the fascia in relation to patterns of movement. See the insert below for four ways to care for your fascia.

Four ways to care for fascia

With good care and feeding, fascia, yours and your horses’ fascia, will maintain suppleness longer. Research shows that these four things together contribute to healthy, flexible fascia:

Hydrate – drinking or access to plenty of pure water;

Regular, varied movement – non-stressful movement such as walking, or being on pasture, helps all mammals cycle energy, toxins, waste products through their body systems;

Get regular bodywork – get support to keep everything moving, like car maintenance;

Stay flexible – physically as well as mentally, since attitudes play a big role in health; do stretches on your horse and with your horse.

Learn more about fascia on Movement in Balance’s Facebook page. Look under Notes for a list of articles, books, videos and other resources.

Working with the nature of fascia 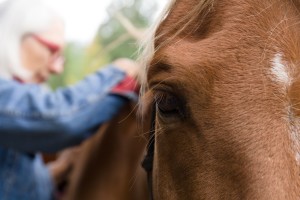 Understanding this one thing can make your training and horse care more effective. The point is not to avoid all stress, but to know that the body needs relaxed time off to integrate and recalibrate after training or bodywork. It’s about balance. Horses need time to move around freely in their turnout to process and integrate the changes in their bodies. Movement also circulates body fluids which helps flush out toxins from guarded areas and allows them to rehydrate. The same is true for human bodies: rest and recovery time with non-stressful movement helps us process and release physical, mental and emotional residue.

Horses are a great passion to which we give our time, our resources, our energy and our hearts. Methods of training, farrier care, and diet are important. Like car maintenance, regular bodywork will help both you and your horse be more resilient and perform better in your chosen activities.

While I believe that we all benefit from bodywork, I hope this article has shown why bodywork will make a difference to you and to your horse. Try new things, vary your routine. If one modality of bodywork doesn’t work, try another. We were all born to move!

This article appeared in the December 2015 issue of Flying Changes magazine.

Fascia photo from the Internet; yawn photo by Tara Federico; all others by Doug Plummer.